I painted this image more than five years ago. With all the changes along that side of the estuary, I really ought to start on another.

The original of Salcombe Yacht Club sold very quickly and it’s been popular as a fine art greetings card ever since.

Cards are usually supplied individually, with an envelope, sealed within a cellophane wrap. There is an option to buy in bulk though – unfolded cards with envelopes separately – and I was delighted to fulfill such an order recently.

Many weddings are staged at Cliff House. While the Salcombe Yacht Club occupies the left-hand half of the building, the right-hand side provides space for community activities, wedding fairs, art exhibitions, private parties and – hooray! – weddings.

One recently married couple chose the Salcombe Yacht Club card as a reminder of the majestic building where these newlyweds tied the knot and will be sending this image as a thank-you card to each of their guests.

If you plan to marry at Cliff House, maybe you’d like to bulk-buy this card? We offer favourable rates for all orders of 50 or more cards. For those who don’t normally live in Salcombe, it’s best to book in advance and arrange local collection/delivery to save on postage costs. As well as Harvest Reaper (the South Sands ferry), Salcombe has the East Portlemouth Ferry providing safe passage from the Ferry Steps across the water to East Portlemouth.

Why did I paint the East Portlemouth ferry?

When the Salcombe lifeboat (Baltic Exchange III) was first launched, it was put on display at one of the London Docks adjacent to the London Boat Show. Members of the public were invited to go aboard and explore this state-of-the-art rescue craft. The lifeboat crew were on hand to escort – and explain its features to – those who came aboard.

One visitor asked Tricky if he had another job in addition to crewing the RNLI craft. Tricky replied, with some pride, that he was a ferryman.

‘What sort of job is that!’ exclaimed the pompous visitor.

Tricky explained that the East Portlemouth ferry service operated every day of the year. It was an honour, he said, to fulfil the long-standing obligations of the ferry service, one which benefited inhabitants of Salcombe town and East Portlemouth, and visitors too. I witnessed this exchange and echoed Tricky’s defence of the importance of this ferry service, and its vital role for those who needed to cross the water. Mr Pompous was not convinced and, unfortunately, left before we could throw him in the dock.

Have you noticed that, during the quieter times, it always appears that the ferry is on the wrong side – the other side! – when you want it?

In my painting, I captured that classic moment, with the ferryman reading his book or newspaper.

Where can you see my painting of the East Portlemouth ferry?

The original painting of East Portlemouth Ferry was bought by a couple who live full time in Salcombe and it’s proudly on display in their lounge.

This image is, however, available as a limited edition print, and one owner of the LEP version is Sarah Parr who lives in Stockport in Cheshire. Sarah says: I have been visiting The South Hams literally all my life …  My grandparents lived in East Portlemouth and I spent every summer and October half term holidays with them along with visiting other relatives who lived in South Pool, Slapton and Malborough.  I have very fond memories of the area and absolutely love the picture of the ferry at East Portlemouth. I remember when the trip to Salcombe was 15p each way!

East Portlemouth Ferry is also very popular as a fine art greetings card. It is on sale in Bonningtons the newsagents, at Salcombe Information Centre, in Malborough Post Office, or direct from Beacon House Gallery. Having sold a painting yesterday, the challenge is to choose which should take its place in my one-man exhibition in the Little Studio of the Loft Gallery in Salcombe.

This view of Salcombe was captured very early one morning.  I’d invested in a photography course with Bang Wallop, and a small group of us drove up to Snapes in the early hours so we’d be in position as the dawn broke. I’d never before sat in the dark, with a group of strangers, cameras ready, waiting for the sun to appear on the horizon. It was a magical experience, and provided a series of wonderful photographs. Soon after, I painted Salcombe Dawn I, an oil, 12 inches by 16 inches, with purple hues. This sold almost immediately but there is a fine art greetings card of this image, and it’s very popular.

I then painted two more versions, a watercolour and another oil, both much larger: 16 inches by 20 inches.

Each one has the same topography – that iconic view of Salcombe town with Bolt Head behind – but I experimented with different tones and colours.

In the oil (featured far above), the sun has still to appear and the pink hues dominate.

The watercolour, Salcombe Dawn III, (below) is cool and calm – daylight has arrived. 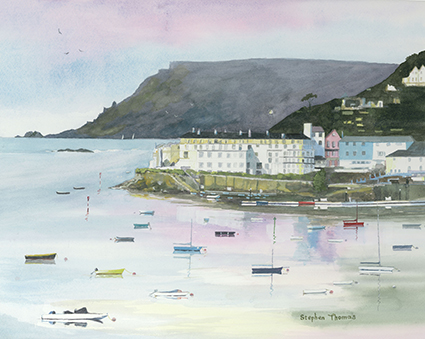 Where can you see my paintings?

Salcombe Dawn II will be on display in the Little Studio as part of my one-man exhibition which finishes this Saturday, 18 June.

I’ll be stewarding on Saturday afternoon (2-5pm). Why not pop in and say hello?

CAN’T AFFORD TO BUY MY PAINTINGS?

Nearly all of the images on sale in my one-man exhibition are also available as fine art greetings cards. Only a short distance from the Loft Gallery, you have the choice of buying these ‘man cards’ at Bonningtons, the newsagents, or at Salcombe Information Centre.